The Art of Recycling show is over. I picked up the Trash Bubbles Heart the Earth https://trashbubblesandlifeslittlebits.wordpress.com/2013/04/11/trash-bubbles-heart-the-earth/  mobile on Monday. It looked so sad and deflated, atop one of my canvas backgrounds, that I knew I needed to do something with it right away.

It did not take any awards. I did not expect that it would. My goal was to bring awareness.

Throughout the duration of the show, I gave much consideration to the fate of the mobile upon its return to Piney Creek Acres Studio. I did not wish to hang it, or hang onto it, for posterity. I wanted to maximize its potential, to continue spreading its message. 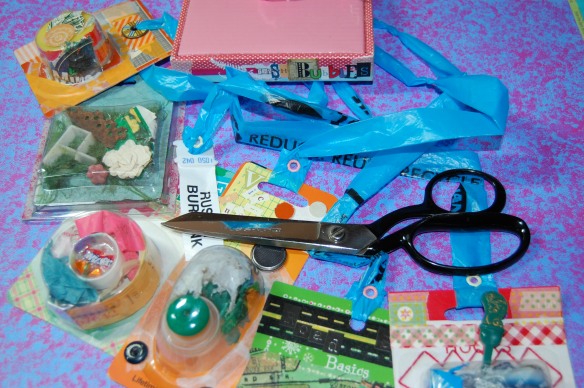 What better way to spread the message than to send the individual bubbles out into the world? Trash Bubbles were originally created as mail art, after all. 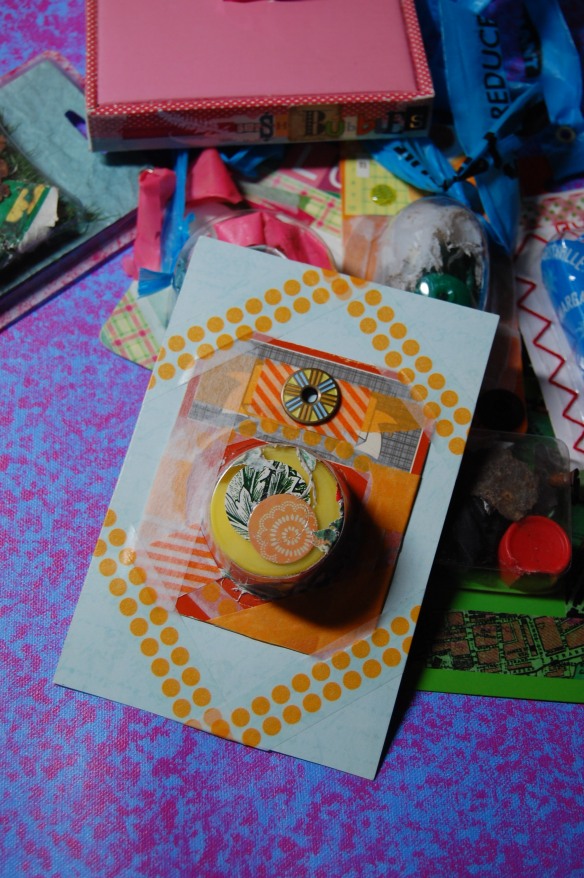 Grow Miracles https://trashbubblesandlifeslittlebits.wordpress.com/2013/04/13/grow-miracles/ was attached to a 4 x 6 inch piece of product backing to prep it for the post.

Now, they are all ready for their journey. Coming soon, to a mail box near you!

One week ago today, Friday, April 19th, the local Art of Recycling show opened at the Cranberry Municipal Center in Cranberry Township, Pennsylvania. A lack of funds cancelled the opening night artists’ reception, but that didn’t keep me from checking out the exhibit.

The Art of Recycling show is sponsored by the Associated Artists of Butler County in conjunction with the Cranberry Township Community Chest and UPMC Passavant. Its purpose is to promote artwork constructed from recyclable materials, in conjunction with Earth Day. The exhibit runs through May 11th.

Some of you might recall that I entered my Trash Bubbles Heart the Earth mobile in this show. You can find the original post here: https://trashbubblesandlifeslittlebits.wordpress.com/2013/04/11/trash-bubbles-heart-the-earth/ 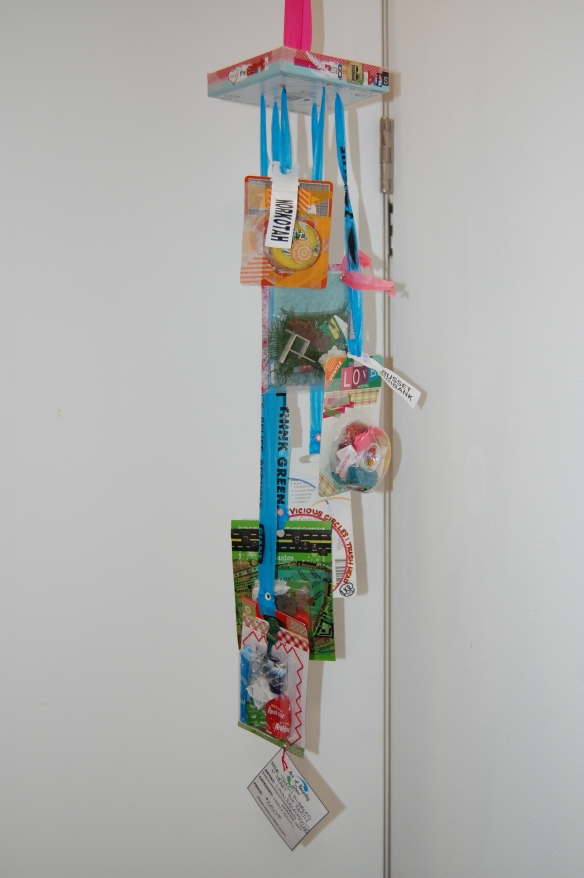 These were some of the other entries:

Regrettably, I did not think to get the artist information for the pieces in the slide show. Some of them had taken awards for merit, others were pieces I enjoyed in some way. I hope you enjoyed them as well. 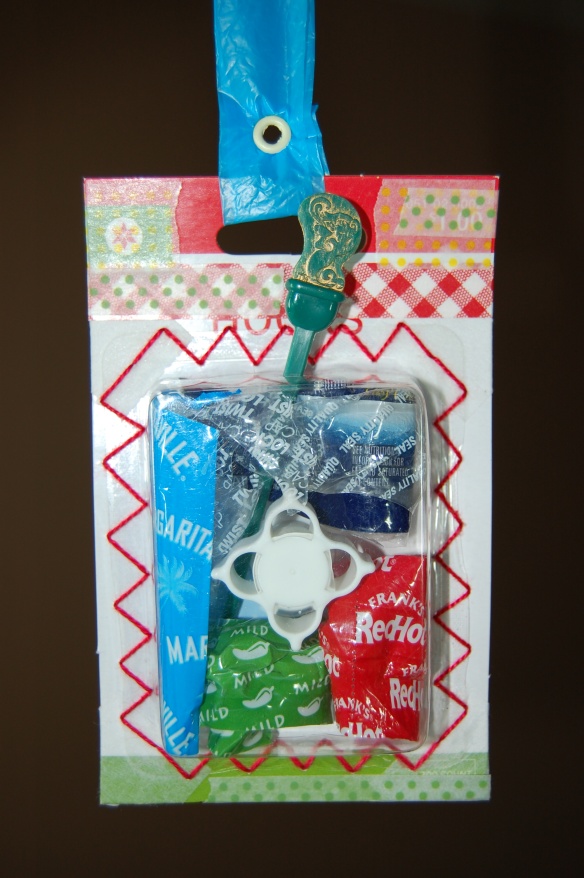 The lengths to which a company will go to brand and package consumer goods never ceases to amaze. Everything is labeled and sealed and sealed again. Although I do realize that a good bit of that is for consumer protection, I can’t help but feel that it is overkill. There is no use for all that post consumer crap which eventually makes its way into the landfill or ends up as litter on our roadsides.

Nowhere is this more prevalent than in our kitchens, where our food stuffs are stored and prepared. One look at this bubble and you can clearly see what I mean. Ninety percent of the trashy bits inside were outer seals from food stuffs. They are colorful and make for interesting bits in trash bubble collages, but beyond that?

In composing this bubble, I chose a blister pack with colors that felt bright and kitchen-like. When embellishing the bubble, I kept to those colors, adding patterns that continued the same feel.

Here is a glimpse of the back:

This was the last bubble in the Trash Bubbles Heart the Earth mobile. The local Art of Recycling show opens today, April 19th, in the Cranberry Township Municipal Building and runs through May 3rd. Check it out if you’re local!

When I first began composing this piece, I was struck by the oblong shape of the bubble. It suggested a human head to me. Soon, I had worked a gas mask-ish collage into the cavity, using the top off a dish liquid bottle and some heavy weight aged plastic I’d found blowing around.

Originally, the blister pack held a Fiskars Circle Punch. The title jumped out at me from the package print and gave me the motif. I worked with the circular shaped trashy bits to embellish the bubble. The old and rusty buttons were sewn onto the package by hand with a heavy needle, though pre-punched holes. 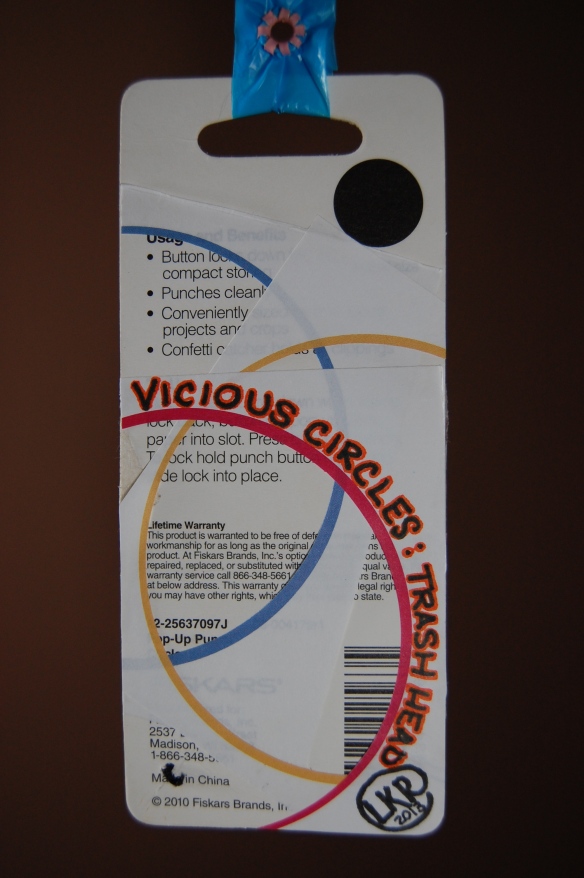 When contemplating the reverse side, circular label leftovers came in handy. They broke up the pre-printed package text and continued the theme quite nicely.

At the risk of being redundant, I humbly ask that you participate in the poll below. It was my question of the week in a previous post, but it seems to have gotten lost in the shuffle. Remember to hit the VOTE button after making your choice.

Gentle Love was created using the Curad paper bandage tape packaging I love. The tape itself is versatile as an art supply. I first began using it to create my own printed tapes with rubber stamps and Staz-on inks. I saved the packaging because I thought it was unusual. Some of my first Trash Bubbles were created from blister packs like this one. I love the divot in the center of the round cavity.

To be honest, this bubble did not live up to my expectations. It is one of my least favorite. It is colorful, I’ll give it that. Again, I worked with the colors of the packaging, whilst attempting to broaden the spectrum. Layered printed paper tapes added color and interest. The addition of the Russet Burbank potato tag was a reference to California Love.

Its message seems to be, “Gentle Love We Help Heal.” Appropriate, when you consider that Earth Day is a time for us to come together in an effort to heal the earth, to do more good than harm.

That brings me to ask my question of the week.

The back is, once again, ready to receive address information. I can almost feel the anticipation in the piece as it eagerly awaits it’s postal assignment.

Litter Bug was the first bubble created for the mobile and as I worked, I measured all the other bubbles against it. Because the mobile was an Earth Day project, I really wanted to focus on the trash as much as on the beauty wrought from it. If not for litter bugs, I wouldn’t have so much inspiration looking up at me from the ground on my walks. However, I can find inspiration to create anywhere. I would much rather folks dispose of their trash properly. 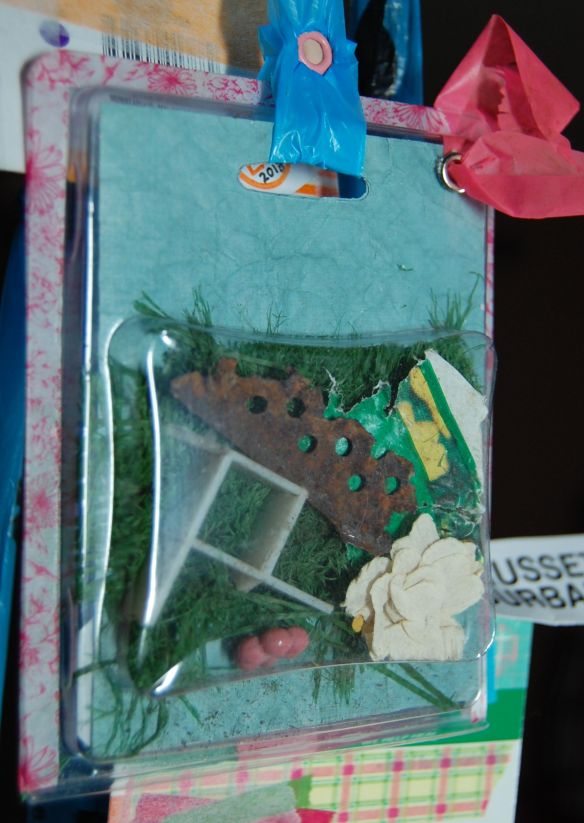 A piece of green all-weather carpet (washed up in a mild flood) made a great jumping off point for this piece. I added a crumpled scrap of smokey blue paper (pulled from my trash can) behind it to serve as sky. Bits of this and that jumped out at me from my jar of trash and found objects and soon, the bubble was nearly overflowing. The composition had become too cluttered. As I was going for a less is more approach, I removed several trashy bits and this was the end result. 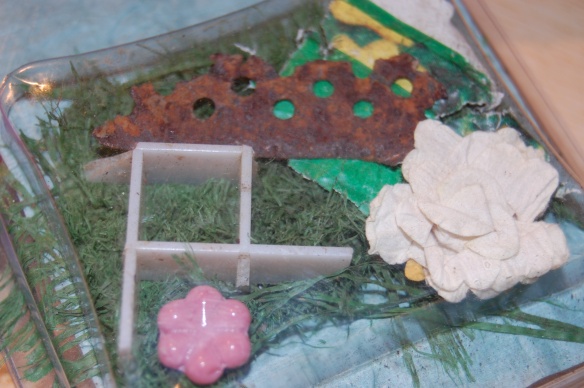 A scrap of that chopped up Miracle Grow bag made the cut, as did a broken piece of flourescent lighting grate, and a fantastically rusty piece. The flower bead (found peeking up from the mud one day) gave me the complementary color I needed to complete the piece.

The packaging originally housed Tim Holtz idea-ology ruler ribbon. (Note the grommet in the upper right-hand corner which held the one inch sample.) The package is hinged at the bottom and snaps together, making it so that little was needed in the way of closure. I threaded a bit of aged gas line ribbon (found on the forest floor) through that grommet and snapped the piece shut, using patterned paper tape to seal the edges shut.

It is a beautiful day in the neighborhood! I’m off to hunt trashy bits and clean up the roadside near Piney Creek Acres….

The Trash Bubbles Heart the Earth blog post https://trashbubblesandlifeslittlebits.wordpress.com/2013/04/11/trash-bubbles-heart-the-earth/  didn’t really do the Trash Bubble mobile justice. So much detail was missed that I have decided to feature each of the six bubbles from the mobile in a post of its own.

Grow Miracles began as an empty blister package from a dollar rubber stamp purchased at Target. It’s rusty orange and grey gave me a jumping off point for my palette.  The orange patterned paper tapes used in this piece were also purchased at Target. (Can you guess the name of my favorite super merchandiser?)

Working with the circular bubble shape, I fitted a milk cap into it and quickly realized it needed more interest. Using circular punches, I cut circles from greeting cards we’d received and layered them together. Much better!

The leafy green of the larger circle gave me the idea to use a piece of a chopped up Miracle Grow bag I found on the ground as a central part of this piece. In it, I also found its title. Grow Miracles! 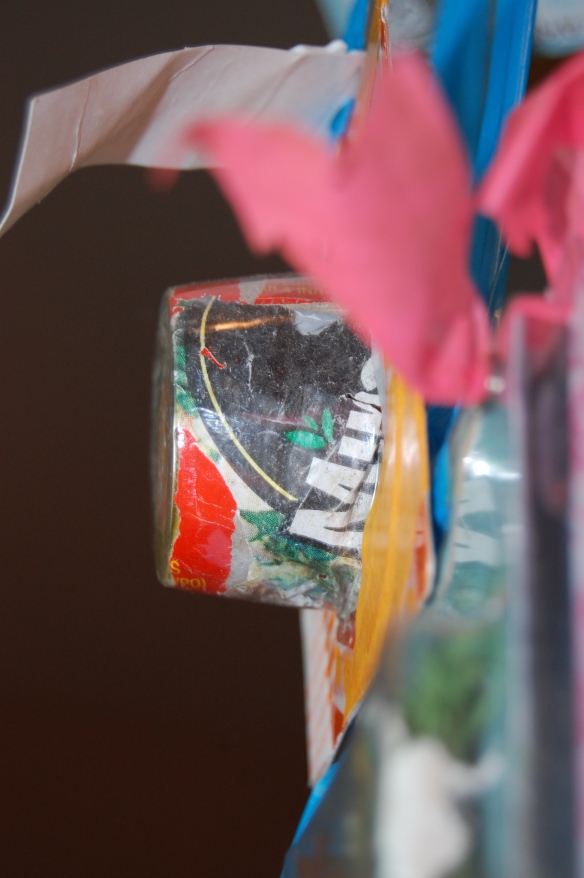 Torn strips from the orange portion of a Puffs tissue box became filler. (The patterned portion of the same box was cut into circles for use in later projects.) 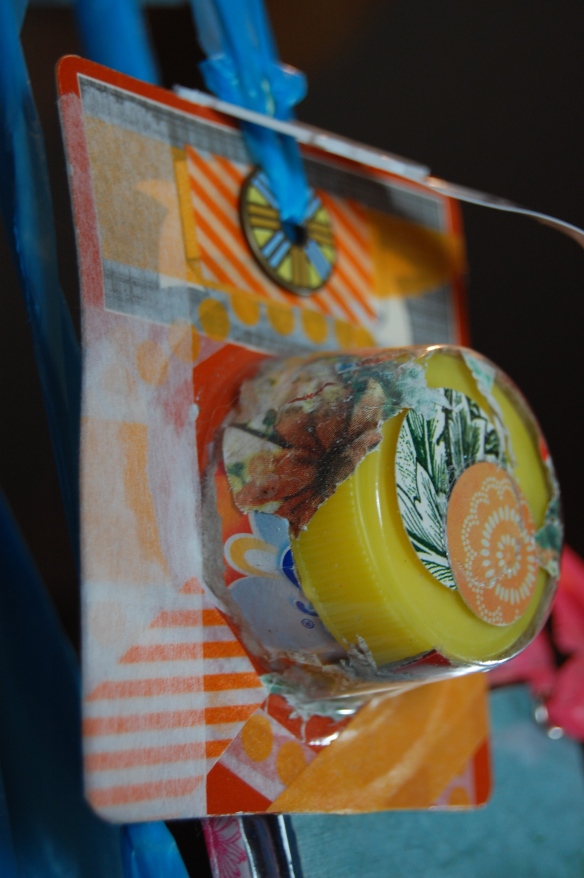 Once the bubble had been taped shut with the patterned tape and plain paper bandage tape, I added a decorative grommet, in coordinating colors, to the top for hanging.

The Norkotah potato tag was almost an afterthought, but I think it adds something.

The back is fairly nondescript, ready to be addressed to a friend when the mobile is disassembled in late May after the Art of Recycling Show has concluded its run.

Error: Twitter did not respond. Please wait a few minutes and refresh this page. 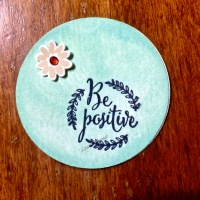 "I dream of painting and then I paint my dream." —Vincent Van Gogh